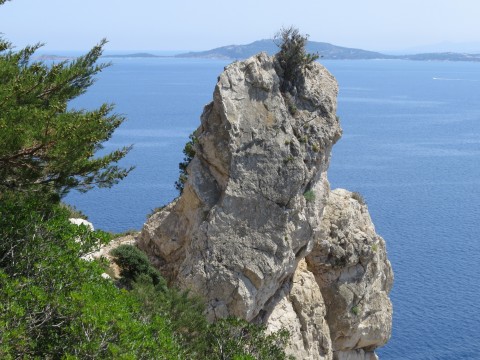 The Protected Marine Area of Tavolara

The peninsula of Capo Ceraso is part of the Protected Marine Area of Tavolara, and is characterized by a varied and charming landscape, a succession of bays, beaches, coves and headlands. The protected zone covers the entire territory that stretches from the beach La Cinta southbound, up to Capo Ceraso northbound and the three islands Tavolara, Molara e Molarotto.

The majestic Tavolara Island, the archetypal ideal island, owes its name to its particular narrow and long shape, ending in the offshoots of Punta Timone to the East and the flatter Spalmatore di Terra to the West. The big island rises up to 565 m above sea level with the peak of Punta Cannone, and lies in its magnificence on the surrounding territory, welcoming to Sardinia visitors landing in Olbia via ferry.

A long and mysterious history.

Up to 10,000 years ago, during the last glaciation, the island was connected to the mainland and emerged from a wooded and hillside area. As the ice melted, about 8,000 years ago, Tavolara gradually began to come apart first from the other islands and then from the mainland. Traces of its geological history can be found on the seabed, where ”fossil beaches”, underwater archaeological structures that indicate the level reached by sea through the ages, can be observed.

The seabeds around the island are particularly rich in shipwrecks, which testify to the fact that throughout the ages the island, though not having permanent settlements, had always had a strategic position with respect to commercial traffic from the mainland to Olbia, a city founded by the Carthaginians in the fourth century BC. After the key role played in Roman and Byzantine times, from 1400 the Tavolara Island experienced a long period of decline which only ended with the advent of the Savoy dynasty. It was Carlo Alberto Prince of Savoy who assigned to Paolo Bertoleoni, a descendant of one of the island’s first inhabitants, the title of island’s owner. From that very moment, Bertoleoni began to see himself as the “king of Tavolara “the smallest kingdom in the world”, of which some traces can even be found at Buckingham Palace, among the portraits of all the kings of the Earth.

In the 60s, with the arrival of the Navy, which expropriated the area to build a military base for very low frequency radio communications, the small community of fishermen and lighthouse keepers moved to the coast where they founded Porto San Paolo.

The Molara Island  much less impressive than Tavolara, owes its name to its rounded, wheel-like shape that characterizes it.

The island, consisting of pink granite, is very rocky and steep, but it also has a variety of perennial springs which allowed human settlements to develop, and is covered by the typical dense scrub vegetation, the Mediterranean Scrub, which is characteristic of Mediterranean coastal regions.

The famous Molara pools, a shallow stretch of turquoise and transparent waters, are one of the island’s major attractions along with some ruins of Churches and medieval villages.

The protected Marine Area of Tavolara – Punta Coda Cavallo includes about 15,000 hectares of sea and the coastal territories of the towns of Olbia, Loiri Porto San Paolo and San Teodoro.

It was established by decree of the Ministry of Environment in 1997, with the aim of preserving the huge natural and scenic heritage constantly threatened by human neglect.

Since 2004, administration of the Sea Area has been run by the Management Consortium, formed by the towns of Olbia, Loiri - Porto San Paolo and San Teodoro.

In a privileged position on the sea, surrounded by 1,000 acres of protected peninsula, Capo Ceraso Resort boasts a private park of over 16 hectares bordering the Mediterranean Sea.
At Capo Ceraso you can live in deep harmony with the sea, the wind and Mother Nature, rediscovering yourself and enjoying the slow pace of slow and relaxed life and good living .